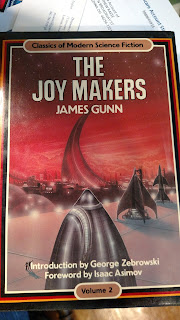 A lot of classic sci-fi share a similar narrative strategy of creating a novel out of district vignettes that all meditate on a similar theme or project the actions of one group of people into the future to demonstrate the consequent actions of another group of people.  Books that adopt this structure are typically more interested in thematics than in character.  At times, this structure can be unsatisfying when the author leaves off one narrative arc to pick it up in the future.  This structure is most noticeable in Isaac Asimov's Foundation series, though he does employ it in other novels.  In Foundation, the narrative opens with Hari Seldon's discovery of psychohistory, but quickly moves away from Seldon to jump decades and centuries into the future.  In this case, the chronological jumps make sense to the narrative and the form actually works with the function, as Seldon's psychohistory allows him to use current data to accurately predict future events to the point that he can engineer the direction of civilization in the direction he believes that it should go.
In other cases, however, the narrative device of jumping into the future is disruptive.  For example, Walter M. Miller, Jr.'s A Canticle for Leibowitz uses chronological jumps to show the development of Leibowitz's legacy through time.  Arguably, Miller is better at characterization than Asimov and he is better able to draw his reader into the narrative.  The novel opens with an acolyte encountering a man in the wilderness while he is on a retreat of bodily mortification and reflection.  The acolyte discovers holy relics of Leibowitz (who was an engineer in the pre-apocalyptic world) and struggles between his faith and his desire to forward the sanctification of Leibowitz.  The jumps into the future in this novel are jarring because the reader becomes invested in the acolyte's progress.  The acolyte dies at the end of the section and the jump forward picks up on a different protagonist and different challenges.
James Gunn's The Joy Makers picks up on the trope and splits into three distinct narrative sections.  In this novel, the study of Hedonics (human happiness turned into a science) is introduced, implemented, and then made into law.  Each of the three sections features a new plot line, new characters, and a different treatment of Hedonics.  In this case, Gunn shows a progression from a hopeful new direction for humanity through to the inevitable conclusion that assured happiness is incompatible with freedom.  There is greater unity in this novel than in many others that adopt the same structure, but it is jarring nonetheless.
The structure of novels like these rely on a different narrative logic than most novels.  In more traditional novelistic structures, the reader can track progression and resolution in a straightforward way.  Even in postmodern novels or in those that play with time and causality, there is generally still an arc that will lead through to a sort of conclusion. This diegesis has a momentum that draws the reader along and propels meaning.  The logic of a novel like The Joy Makers is based on syndesis, or a connection of different parts.  The novel presents the different sections and asks the reader to fill in the meaning between them, to synthesize the connections and discern meaning.
Many of these novels also probably began as separate stories or were published serially, so that they were originally written to stand alone.  This was the case with Miller's book.  Whatever the origin of the novels, the work of making sense of the finished novel remains the same.  The reader must still work to re-assemble the discrete plot lines to make sense of the larger thematics at work.
The rule of three, then, refers to the tendency to split these novels into three sections.  In this way, it does mirror a story arc: the initial section sets up the conceit of the novel, in The Joy Maker, it is the idea that happiness can be mathematically calculated and, thus, ensured to everyone.  The second section builds upon the topic of the original, typically to demonstrate growth of the idea from its initial stages to broader acceptance.  In this case, Hedonics is made the law of the land and Happiness rather than the pursuit of the same is considered to be an inalienable right.  Finally, the third section makes clear why this is actually undesirable.  The story arc, re-written as disconnected stories creates a sort of ironic structure that requires extra effort on the part of the reader.  The author trusts in the reader to make connections between the sections and to grasp the direction of the whole. 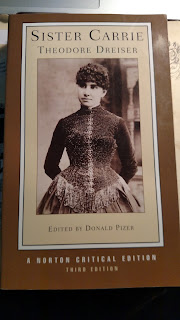 Theodore Dreiser's Sister Carrie is another of the books that I read long ago in graduate school but wanted to return to.  It was in a 20th century American literature course where I first read a lot of realism and naturalism and started to gain a taste for authors I had never read before.  I have mentioned American Naturalism here many other times and I know that I have mentioned Dreiser at least once before.
This novel holds up with what I remember.  The story itself is simple enough but I was more interested in Dreiser's approach.  In other naturalistic novels, the author tends more to present narrative without a lot of exposition or commentary.  Stephen Crane wrote spare novels that demonstrate the restricted choices that characters have and the outcome of their paths.  In one sense, Crane's novel Maggie accomplishes most of what Sister Carrie does in a fraction of the pages.  One of the things that Dreiser does differently is inject his own philosophy move overtly into the text.  There are many points at which the narrator will offer opinions on such topics as happiness, productivity, labor shortages and unionization, and art.  Rather than simply using the narrative to showcase the deterministic inevitability of decline, Dreiser opts to also build his case on top of this.
One of the more striking examples of this takes place late in the novel.  Carrie has become a comedic success and is finally making money and gaining recognition for her acting.  Dreiser pulls back the veil on the superficiality of her fame through the character Ames, a young potential suitor.  While Carrie had been content in the comforts her new fortune allows, Ames challenges her to take on more serious roles.  He tells her that he sees something in her acting, that her facial expression is a "natural expression of [the world's] longing."  He continues, "The world is always struggling to express itself ... Most people are not capable of voicing their feelings.  They depend upon others.  That is what genius is for.  One man expresses their desires for them in music; another one in poetry; another one in a play." Ames sees artistic expression as a responsibility, he even calls it Carrie's burden.  Soon after this Ames disappears from the novel and Dreiser ends the novel with Carrie sitting on a rocking chair, dreaming of the happiness that she will never feel.
I like this notion of aesthetics, even if I cannot fully subscribe to it.  Essentially, what I take from this is that Ames (and possibly Dreiser, himself) sees art as methods of forging connections with the world.  The audience finds connection to the world and to their own emotions through the expressions of others.  If this is true, then it is a burden on the artist to vicariously emote for others.  I think that this is part of what art can do, but it also seems that Ames wants to romanticize the artist and the nature of genius. 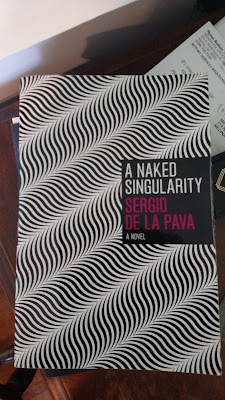 At the heart of Sergio De La Pava's large book is a good heist narrative.  Casi, a young and talented public defender in New York City is drawn into a scheme to steal millions of dollars from drug dealers.  Casi and his partner in crime run into difficulties and Casi is hounded by a dirty cop trying to retrieve the money for his criminal employers.
The novel borrows heavily from the themes of Crime and Punishment as Casi tries to justify the theft.  He thinks about the good that he will be able to do with the money and argues with himself that taking this money out of the hands of criminals is a net moral good.  However, rather than subscribing to the same great man theory that Raskolnikov does, Casi and his partner strive for "perfection" in the execution of this crime.
The moral ambiguity of Casi's position and the discussions that he has with his partner rework some of the conventions of crime fiction in an interesting way.  De La Pava humanizes Casi and makes his internal struggle feel true.  Although this is a thoroughly postmodern (post-postmodern?) novel, it does draw upon aspects of naturalism, as well.  In particular, De La Pava wants to re-create the mind-state of the individual involved in the crime, to provide a sort of rationalization if not outright justification.  Much of Casi's process reminds me of the defense in Theodore Dreiser's An American Tragedy.  In that novel, a factory owner's son kills a woman who worked in his father's factory and whom he had impregnated.  He murders her by bashing her over the head in a rowboat and dumping her body in a lake.  The unorthodox defense of his actions was to admit that he did intend to kill the woman but that, at the very last second as his arms swung through the air to crush her skull, he no longer wanted to kill her but couldn't pull back to prevent her death.  The defense was not meant to exonerate him, but to create doubt as to the actual intentions.  Casi plays a similar game in which he engages in extensive planning of the heist but constantly reminds himself that he cannot be serious about going through with it.  He allows himself to maintain his sense of morality by denying that he will actually commit any crime and claiming that this whole venture is an exercise in finding "perfection."
Unfortunately, there is a lot more to this novel than the heist narrative.  This novel is packed with quirky characters and philosophical quandaries that tend more to muddy the focus.  Taking a cue from David Foster Wallace's Infinite Jest, this novel also contains meditations on sports (boxing rather than tennis, here) and a preoccupation with television (one character uses a bastardized version of the ontological argument  for the existence of God to attempt to bring Ralph Kramden of The Honeymooners into reality).  There is a moment at the end in which one character describes what a naked singularity is to another character.  At a different point in the novel or in a shorter version of this novel, it would have made a greater impact.  But by the time I got to that point, I was swimming in all of the odds and ends of the novel.  The point about the nature of reality was too diluted to be really significant.
I found this novel originally while I was working on my dissertation and read it as a possibility for inclusion there.  Although it was fun to read, I didn't rate it highly enough for inclusion.  I might have mentioned it somewhere, though.  I forget.  This second read was probably more enjoyable because it was less rushed.  I did find myself skipping sections devoted to descriptions of certain boxers' careers.    De La Pava's descriptions of boxing were less vital and urgent than Wallace's use of tennis for basically the same purpose.  I do not know much about either sport and am not particularly interested in either, but Wallace's writing drew me more to tennis based on his passion and ability to clearly communicate that.
Posted by mwr at 6:36 PM No comments: