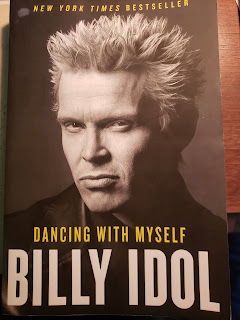 I picked up Billy Idol's 2014 memoir Dancing with Myself at Horizontal Books, a discount bookstore in Cleveland.  I was curious to read what he had to say, figuring I would just skip around and look at the pictures before giving it away.  The book turned out to be more engaging than I expected and I ended up reading the whole thing.  I have always been aware of Billy Idol; his songs were a constant on the radio when I was a child and I discovered his band Generation X when I was getting into punk rock.  It is safe to say that I knew the broad contours of his career from his early days through the bad press of his Cyberpunk album, but did not know much about the solo portion of his career specifically.
Billy structures his memoir around a motorcycle accident that occurred in 1990.  He opens the book with a description of his crash, and then sees this as a turning point in his solo career while he was making his Charmed Life album, and then he circles back to the accident in the epilogue to reinforce its pivotal role in his life.  If this was a 12-step talk, the accident would have been his bottom, the thing that finally helped him to get over his addictions.  But he doesn't quite phrase it that way.  It more that this was a culmination point for many of the events in his life.
I mention this structuring because of the way that it sets this book apart from other rock 'n' roll memoirs that I have read.  Mick Wall's book about Lemmy tends to mythologize the man by nearly erasing narrative plotting.  So much of Lemmy's life seems just a continuation/repetition of his early days that the stories within the book run together.  Elvis Costello's book reads more like a picaresque: a string of events that create a sense of forward momentum but which don't necessarily add to an overarching plot.  Both of those books are more meandering and seem more personal.
It was interesting to read about Billy's early days in the Bromley contingent and on the London punk rock scene, but there was not a lot that I didn't already know.  He writes lovingly about a broad group of people in his book, but they are all held at a certain distance.  Even his long-time lover Perri comes and goes throughout the book but the reader is left knowing little about her aside from her connection to Billy.  In a certain way, this makes sense.  It is his book, after all.  But it seems to reveal more about the author in its way.  Billy often seems contrite about the way that he treated people near him during his drug-using days.  He writes about the way that addicts will use people close to them.  But these people still seem kept at arm's length in the book.  It is not until the very end of the book that Billy writes about his father's failing health that some of the personal emotion breaks through.
Billy and his father share a moment when they discuss his choice to pursue music and some of the difficulties that their relationship faced.  The scene is well-written and seems like a genuinely touching moment that is much less guarded than much of the memoir.
I did enjoy the sections about his time in Chelsea and Generation X more than the rest of the book.  Like the scene with his father, these sections seemed less guarded.  He seemed less defensive of those bands than he does about his solo career.
Posted by mwr at 11:49 AM No comments:

What follows is a partial review/reaction to Stephen King's novel Revival that I wrote shortly after reading it when it came out in 2014.  This is unfinished for a variety of reasons but I like it because I muse a bit on the development of my reading life and the damage that high school English classes caused it.  Luckily, I was able to recover with the help of some great college professors who were more inclined to read books the way that I wanted to.

As a young reader I took book suggestions from anyone willing to give them and I read nearly anything that seemed at all interesting.  It wasn’t until I was in high school that I began to learn that different authors were held in different esteem based on their perceived position along the “literature-pulp” axis.  This meant that I read an awful lot of genre fiction and novels that I was later taught were less worthy that what I might be reading.  High school was a horrible period in my reading life because those AP English classes encouraged me to look down on some books and authors, many of which are actually quite good, and work to dig the worth out of some boring books considered classics.  To be fair, there were also a lot of books that I hated in high school but have come to truly love on second readings.

My early years in college continued in a similar vein and I stopped reading a lot of authors I enjoyed because they didn’t write the right kind of books.  It wasn’t until I was in graduate school, pursuing my Master’s in literature that I lost the last vestiges of this non-sensical way of reading literature.  I finally shook off the last bit of guilt I felt for reading horror, sci-fi, and crime books.  This happened when I re-read Stephen King’s The Shining.  The novel had its moments and was enjoyable overall.  But this isn’t about that book.

The book I recently finished is King’s 2014 novel Revival.  This novel blends elements of Lovecraft and Frankenstein with a coming-of-age/redemption story.  Jamie Morton, the narrator, relates the story of his relationship with Charles Jacobs, a one-time reverend who is obsessed with a secret occult power source that he discovers.  Jacobs draws Morton into his life at several points, at one time curing him of his heroin addiction using the secret power, and becomes more drawn into his secret researches all the while. Jacobs is a character like many in horror/sci-fi who is drawn to the sublimity of the unknown.  He finds a little-explored corner of knowledge that hints at bigger secrets to be discovered and begins to uncover an even greater power source beyond his control. King takes a play from Lovecraft’s book and sticks mainly to Morton’s reactions of terror than to the actual images of horror.  This keeps the horror more subjective and leaves more up to the reader to imagine.

Revival is not my favorite King book.  I think he could have shaved off about 30% of the text and been left with a better novel.  A lot of Morton’s narration about his own life seems unnecessary and I spent a lot of time wanting to get to the main line of the story instead.  Morton thinks he is telling the story of Charlie Jacobs and his obsession with secret electricity, but he manages to get a lot about himself into it as well.  A bit more balance on this score would have made the book more enjoyable to read.